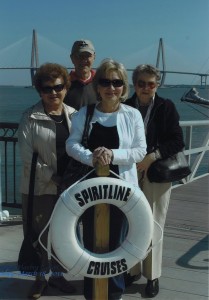 Jan and I took my mom and cousin Freida Bearden to Charleston during spring break. We stayed at the Inn at Middleton Place, which is on the grounds of Middleton Place plantation, right on the James River. Although the inn could use a little updating, the setting there is magical. We were a stone’s throw from the James River; Jan and and I took nightly strolls along the lighted paths through the plantation.

We toured all of the plantations, the Magnolia plantation being our favorite. Middleton Place, by the way, was where one of the big scenes from The Patriot was filmed – where Mel Gibson and his band blew up the ship in full view of Cornwallis and his guests.

My favorite thing was being able to see the Confederate submarine, the Hunley.

Everything about Charleston oozes history, and I was fascinated by the stories that lurked around every corner. Like the discovery of the remains of the Hunley’s first crew, found buried under the football stadium at The Citadel!

I was disappointed that I didn’t get to see Dubose Heyward’s grave – you know, he collaborated with George Gershwin on Porgy and Bess (which was based on Heyward’s novel, Porgy). There’s a great story about Gershwin stealing the show from the main “shouter” during a Gullah gathering around the campfire on Folly Beach. Wish I could have been there for that.

We took a Gray Line bus tour our first morning in Charleston, and I was very impressed by the delivery of our tour guide. As we got off the bus at the end of the tour, I said to her, “If you aren’t a musician, you should be, because your timing is incredible.” Turns out that she is in fact a music director, and she is soon taking her choir to New York to sing the Rutter Requiem in Carnegie Hall under the direction of the composer himself.

We had a great time in Charleston. My mom had never been there, and I know it is a trip that she will always remember. I could never do enough to repay her for all the trouble I was when I was growing up! 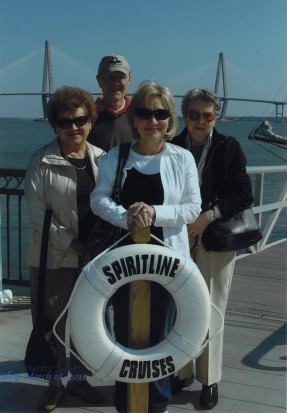