The Power of Music

I was visiting this past week with a good friend of mine, George Doerner, a trumpet player and bandleader from Savannah, Georgia. George will be 93 years old in a couple of months, and he has lots of wonderful stories. While I was there, he told me a story I had never heard before; it was about playing the bugle at Boy Scout camp. It grabbed my attention, and got me thinking about the power music can have on our everyday lives that we sometimes don’t even realize.

I thought I might share it here, and rather than try to recount it myself, I’ll do my best to transcribe it in George’s own words: 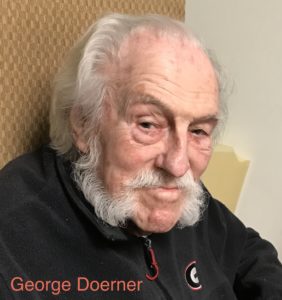 Well, everything [at the Boy Scout camp] was done by bugle calls, and I would get up and play reveille to get everybody up. Then an hour or so later, I’d play the mess call and they’d come up for breakfast and so on and so forth through the day.

Well, one day I woke up and I was so damn tired and sleepy that I thought ‘Well I think I’ll just sit here another five minutes or so.’ Of course I fell back asleep, and about two hours later when I woke, I was terrified when I saw what time it was. I ran outside and saw that the whole place was quiet; everyone had overslept because I hadn’t played yet.

I went running down to the middle of the camp, and I banged on the door of the man in charge of the whole thing. And he came to the door and was all sleepy eyed, too.

I told him what had happened and he said “Well, don’t get all excited George; we’ll just be two hours later today on everything we do,”

So I went on and blew the reveille and the camp got up.

What was so funny was that there were these women, these country ladies that did all the cooking for us. And they were all standing out on the little porch wondering where everybody was. They had breakfast all cooked and nobody showed up.

But, we finally got it all squared away and I guess all’s well that ends well.